There can be a couple of reasons for this. If the wick used is too small for the container, it will not be big enough to “pull” the mixture of ingredients (wax and fragrance/dye/additives) up the wick to create proper combustion. This will be noticeable because the burn pool will not reach the edges even after several hours and most times, the wick will just burn out from lack of combustion.

A candle that is wicked appropriately for the recipe (taking into consideration the type of wax, jar size, and additional additives) will not burn out prematurely.

Take a look at the picture below. This candle is likely wicked about right or possibly with a wick slightly too small. At this point (when the picture was taken), it might be a little early to tell. It's good that the melt pool has almost reached the edge of the jar. If the melt pool doesn't spread across very much and the candle begins burning straight down (called "tunneling"), then that is a sure sign that the wick is too small. That is not a problem in the first picture below.

The picture shows that the flame is a good size but since the melt pool hasn't reached the sides, it is possible that the wick could be slightly too small for this particular jar/recipe combo. Alternatively, the wick may have simply been trimmed too short.

A very small blue flame is typical of a wick trimmed too short. Ideally, a wick should be trimmed to 1/4 to 1/3 of an inch. If the candle in the first picture below were to burn out prematurely, it would be indicative of either a wick trimmed too short or using a wick that was not thick enough for the jar diameter and recipe combo. More testing would need to be performed to determine exact cause. 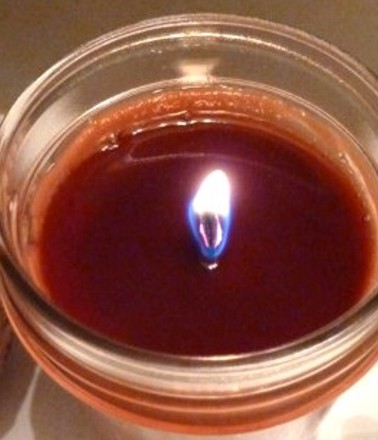 The wick in the picture BELOW indicates a wick that is much too large for the jar diameter/recipe combo. The flame is very large and the melt pool is very deep. While burning a candle longer than the recommended 2-4 hours can also produce a deep melt pool, if a deep melt pool is created in a short time period, it is likely due to using a wick that is too large for the jar/recipe combo. A rule of thumb is that a melt pool should spread at an approximate rate of 1 inch per hour of burn time. 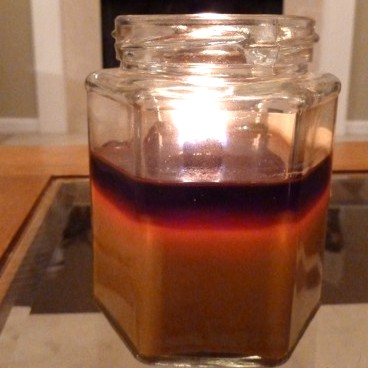 Testing one or two wick sizes per jar/recipe combo is the only way to be sure the candle recipes you plan to sell are wicked properly. Changing only one part of your recipe (such as fragrance) may mean wicking up or down - even in the exact same jar size and type. This means patience and a little investment, but in the end you will be able to say with confidence that your candles are top quality!